Two young lion brothers greet each other with play and a roar.  This is one of three prides in Chobe – a park known for its lions and where lions have been known to take down elephants. 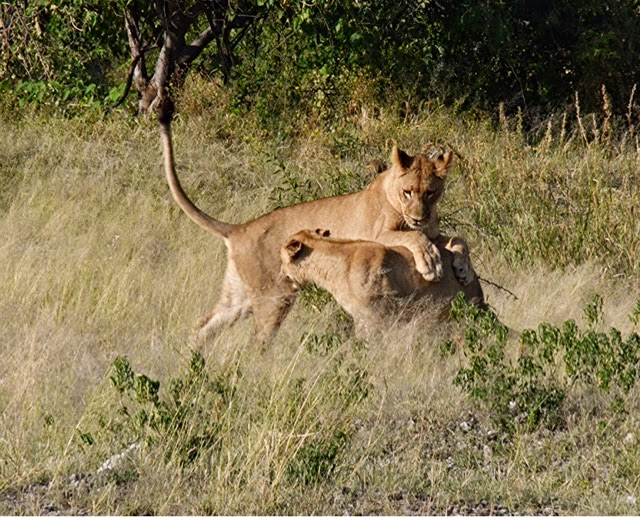 This bull elephant is washing his watergrass carefully before eating it.  Elephants have molers, and when the teeth have worn down and they can no longer eat, they die.  So washing the mud off the grass extends their life.  The egret at his feet enjoys the bugs and fish the grass pulling dislodges in a symbiotic relationship. 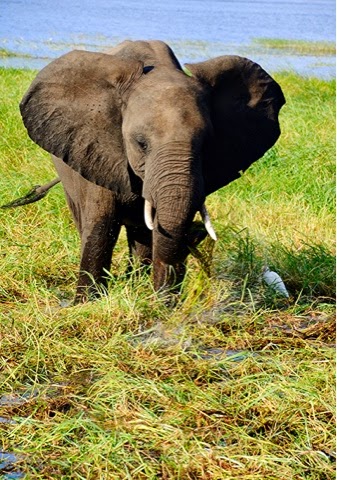 These elephants came down to the river for a long drink.  They line up and protect the young elephants in the center between the adults. 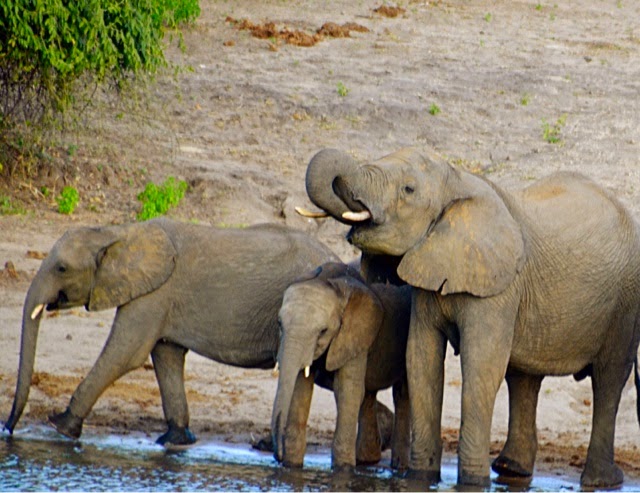 The river itself is beautiful and full of fish and life – a huge estuary of shallow brown fresh water that grows grasses and flowers and makes a haven for many species of birds. 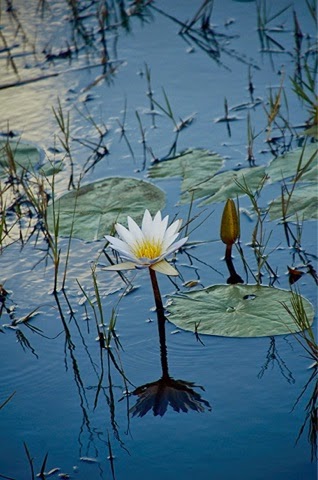 The African Spoonbill fishes in the river estuary 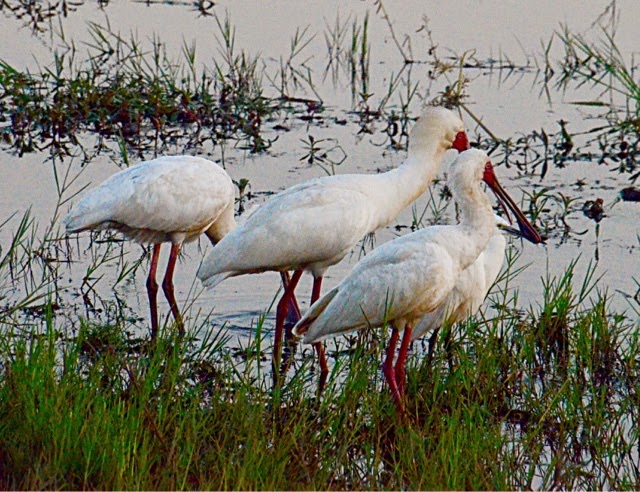 A bird perches on the neck of this young male giraffe eating ticks as the giraffe grazes on the treetops. 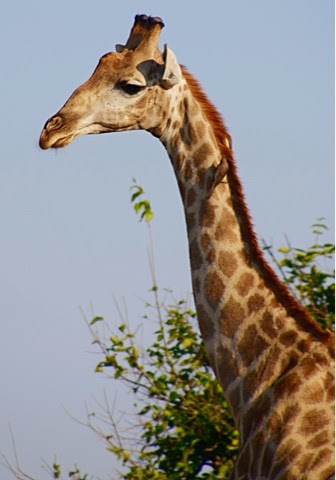 Three female impala graze in the female herd.  It’s breeding season, and the dominant male is frantically running around trying to impregnate his hundred or so females, and run off all the bachelor males with growls and lowered horns.  Most births happen in the span of about two weeks. A female who is impregnated late will eat a poison bush to kill the fetal impala before it is born rather than give birth too late outside the window.  The poison does not hurt the mother.  Once a year the bachelor males come back to the herd to try and take the place of the dominant male.  Typically he is replaced … he’s too tired to win the fights after all his duties of guarding and breeding to defend his place. 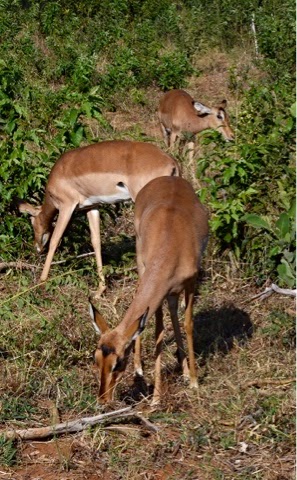 This BeeEater bird is migratory but comes here to breed.  They breed by digging holes in the riverbank and laying their eggs in the muddy caves.  We could see these birds flying in to feed their young in a coloney of nests, little heads sticking out of the holes asking for food and brightly colored BeeEater tales protruding from the mud as these birds fed their young. 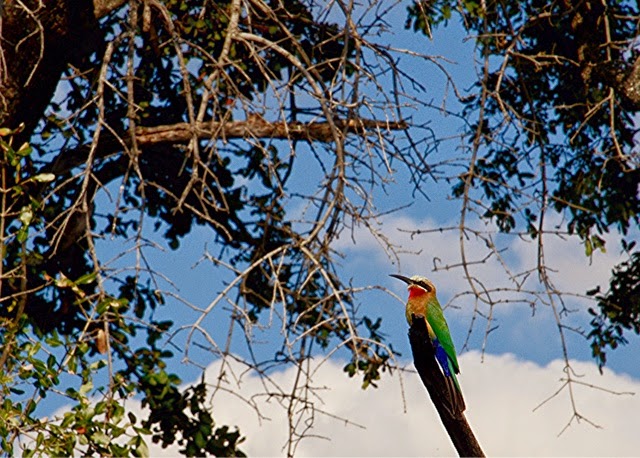 These hippos – both young – play in the shallows.  Hippos are the most dangerous of Africa’s animals and kill more humans than any other wildlife here with their large tusks and fast speed – even on short stubby legs.  Buffalo are the next most dangerous – they attack without warning and don’t leave until they have confirmed their kill. 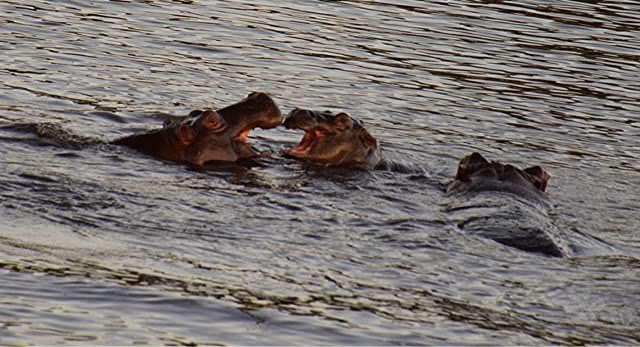 This African Darter is a close relative of the cormorant.  It gets its name from the motion it makes snatching up fish.  It is drying it’s wings after fishing. 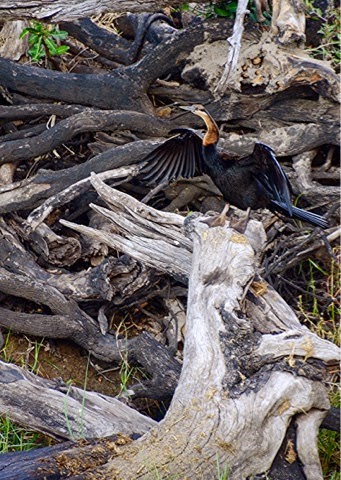 This baboon is finding insects in the dirt and popping them into her mouth.  Or, maybe she is wondering if we have anything good to eat in the truck for a future raid. 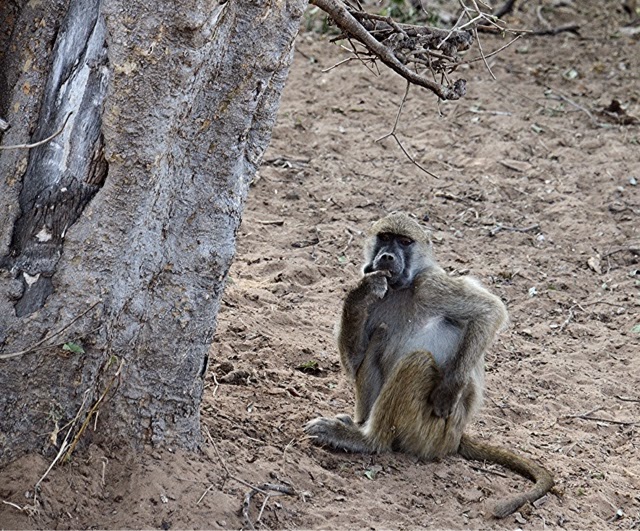 These maribu storks favor the dead trees that the elephants have killed in the park.  They eat carion and make short work of any dead animals in the park. 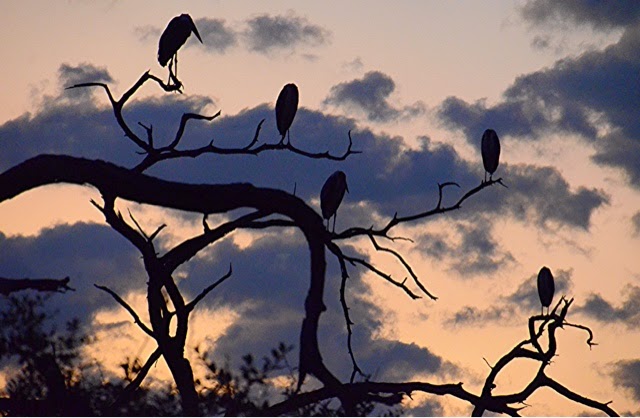 This Pied Kingfisher darts along the waters edge fishing and lives in holes in the mud on the bank. 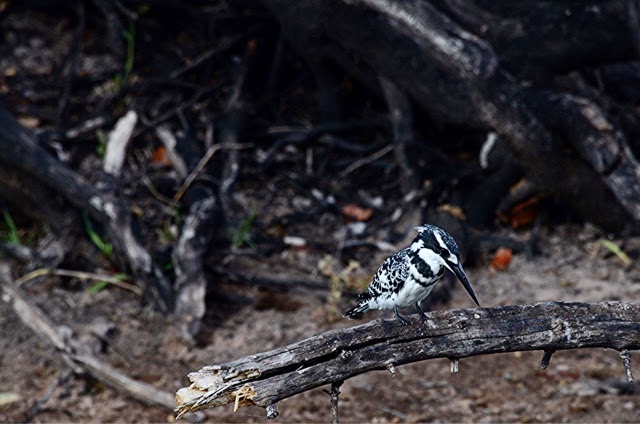