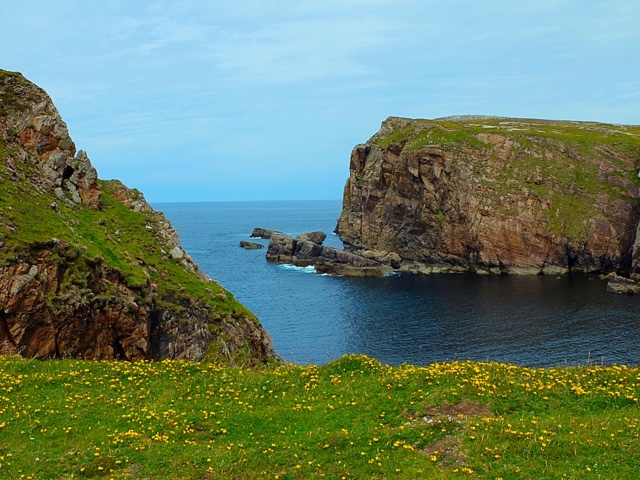 "Ireland's Islands are very romantical, they are".  This is from The King of Tory Island, who is showing us the art gallery and doing a wee bit of flirting in the process.The King of Tory IslandAnd yes, he is a real king.  And with his captain's hat and gold hoop earring and penchant for telling stories and easy laugh, he is the perfect ambassador for this tiny Island that desperately wants more visitors to come across the rough channel.Tiny Tory Island, on the very northern tip of Ireland, within squinting view of the Scottish Isles on a clear day, has been electing a king for the past 1400 years.  This was a tradition of many islands in Ireland ... Tory is the last.  He is referred to by everyone on the island simply as "The King".  He refers to the island as "my island".The cliffs are full of nesting birds, and the waters have hundreds of birds and dozens of species flying and fishing below.Besides having the last Irish King, Tory Island is also one of the few places where locals all still speak in the pure Irish Gaelic, and the culture and traditions remain truer here than most other places.  This is because the Island has been so isolated from the mainland for so many years.  And also because they have a healthy history of smuggling and contraband whisky making and other nefarious activities that encouraged keeping a healthy separation from modernity.The population of around 200 live in two tiny villages - clusters of white houses with red trimmed windows and doors circled against the winter wind and weather.  Remains of a 1200 year old monastery and its tumbling bell tower still sit in the middle of the village.  Boats are pulled up on shore ... there is very