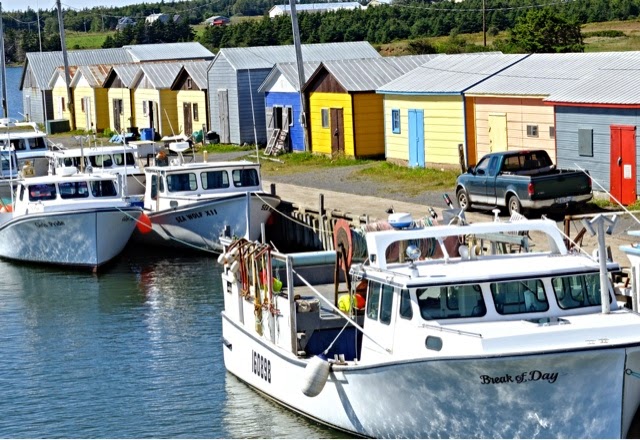 This comes from a fisherman who looks like he could have walked out of a movie with his wild white hair and deeply etched face that bore the weathered years at sea.

We were riding out the north east coast of Prince Edward Island through very rural coastal roads with few houses and a hand full of villages that consist of two or three houses and a sign marking the spot.  We had reached Naufrage Harbor, and I had decided to make this quiet biking day a little more fulfilling by going down and chatting with the fishermen.
This man was with two buddies and they were scrubbing the green slime off the bottom of fishing boat that listed on its side.   All three were in knee-high Wellingtons and they worked quietly and methodically, scrubbing and talking.
I pulled up and said hello and commented on how beautiful the island was,  With a wide-eyed scoff he started talking about the hard side of living and earning a living on this island.
The harbors freeze, and ice drifts down from Greenland and Labrador in huge thick sheets and stretch far out into the sea as they pile up against the island.  The ice sheets crash into each other driven by wind and currents and cause huge ice ridges to rise out of the ocean. 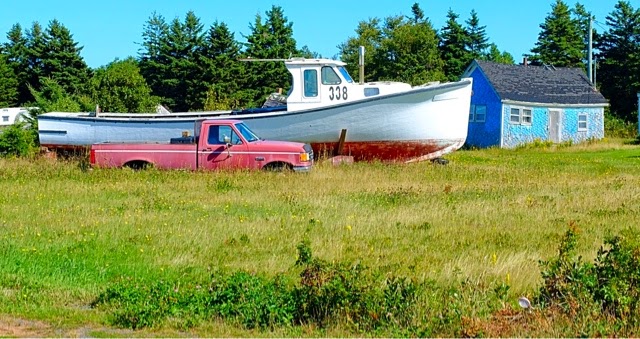 All of the boats must come out of the water.  We have seen them parked in front yards before the freeze destroys them in their harbors.  They perch like monuments in front of modest houses, testament to the many months of the year where there is no work for many residents here on the island.
He generously answers my questions …. Lobster season starts up in May and every boat can have 300 traps.  No limits – they can take what they catch.  But if it’s a cold winter that lasts well into spring – like this year – the ice is too thick and the lobster season is shortened.  Sometimes the government will extend the season by a day or two, but not much longer because the lobster start spawning.
After lobster is over, boats can fish for mackerel if they have the license.  And then there is tuna. 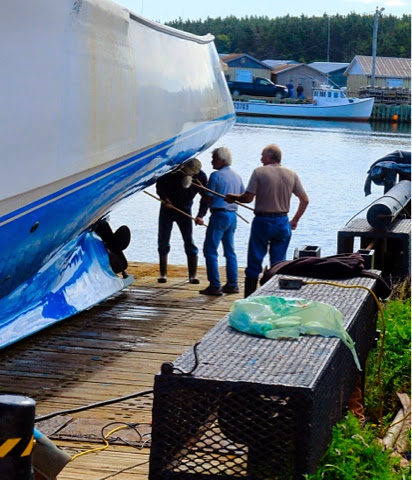 Commercial fishermen can catch one tuna a year.  They try and catch the largest possible  because they will sell it for around $16 a pound to distributors who ship it within 24 hours to Japan, where consumers will pay $50 or $60 for premium sushi.  The price is determined by a core sample to gauge the quality of the tuna.  One fish can weigh 900 or more pounds, so a fisherman can earn a huge portion of his income from one big tuna.
Two of the three fishermen had caught their fish this year and had applied in the lottery for a chance to catch a second.  The third was still holding out for a bigger fish at the end of the season – risking not catching a fish in favor of catching the largest fish possible after the voracious tuna had gained as much weight as they could.
So much rides on such a short season.  Clearly these men work together to maintain their boats and catch and harvest.  I expect it takes collaboration to make a living and balance out the bad years with the good.
Further up the shore we met sports and charter fishermen in North Lake.  There was a Tuna Tournament going on, and the charter boat I talked to had hooked and released two 800 pound fish.  We met another man whose boat placed 5th this year (last year they won) and they had landed an 1100 pounder – it took 55 minutes to bring it in (they are limited to an hour to not overtax the fish).  The charter had taken out two representatives from a Japanese company who were testing the massive rod and reels they used to hook the fish, and had some very happy clients.  Sports tuna fishing is entirely different – it’s catch and release.  It’s for fun … it’s not their livelihood.
As a visitor here on the island I see the beauty and it feels like a peaceful place.  Underneath I begin to understand that this is a place where its actually pretty difficult to live.  Young people leave the island to go work inland in the oil and gas fields where they can earn a good living.  People who can afford it leave for the winter to escape the cold.  Others who can afford it come for the summer and have a separate summer house.  Many of the B&Bs seem to be ways for people to bring in extra money during their short tourist season.  Some people move out of their home and rent it out in the summer to tourists for the income.  Temporary labor from China works at the lobster plant in Georgetown.  Temporary workers from off-island leave their homes and spend the summer at tourists shops and restaurants scooping ice cream and waiting tables.  I saw few schools and few children.
And there is an effort to maximize everything that might remotely interest a tourist.  Anne of Green Gables – the children’s book series set on PEI – has been developed into a re-created Avonlea village complete with costumed actors, a hefty entrance fee, and gift shops, stores and an ice-cream shop.  An amusement park and other tourist traps beckon nearby.  Time is short – they need to maximize the income in their short summer season.
Despite the touristy sites that beckon visitors eagerly, the courtesy and kindness and generosity shown towards visitors is phenomenal.  And it’s very genuine … born from a desire to share their island and make sure you have a good experience – and not just because you bring tourist dollars.   I think I have been treated better here than anywhere I’ve ever visited.
Perhaps the courtesy reflects the essence of what is necessary to live on this Island and thrive.   People understand that it’s how you treat others and work together that keeps them going … through the lean years and the good. And that courtesy pays forward to the island’s guests.