After visiting, I’m inclined to agree.

Genoa wears its incredible history and battle-scars and extravagant palaces and churches as showpieces of former wealth and brilliance like a jeweled but worn gown.

As you walk the city you know you are in a special place that has been a power-player in history.   And as you walk, you see the hard times and the working class history that gave Genoa the reputation as a dirty and dangerous port.  And now the city wears both legacies – the palaces and towers and marble facades and masterpieces of art next to graffiti and industrial cranes and bustling neighborhoods and commerce.

La Supurba exudes the confidence that comes from knowing it is special.  It seems to be patiently waiting for the rest of the world to figure it out again … that Genoa a modern center of culture just as it was in the 1500’s.

And the world is looking at Genoa again thanks to vast infusions of money  to clean up and make improvements to the port and the city over the last decade, and international recognition of its unique historic treasures.  And best of all, the city’s residents were happy to see me and very intent on making sure that I left knowing I was welcome and that their city was worth the visit.

I have been interested in visiting Genoa for years.  The medieval history – home of Columbus and its powerful place in history as the Europeans started their global conquests – captured my imagination years ago.  So while my companions went to the Cinque Terre for the day Friday, I caught the early train to Genoa.  It’s a 2.5 hour train ride north on the Ligurian Coast.

What a great day exploring a great city.  These images capture a small look at a fascinating and complex place.

Genoa has 42 palaces listed together as a world heritage site.  These palaces were all built by the wealthy in the around 1600 and are elaborate buildings full of art and elaborately decorated.  They are filled with art from the Dutch masters such as Van Dyk as well as Rafael, Tintoretto and more.  The exteriors are often painted to have frescoes  or columns that are painted on the exterior.  These are statue covered, painted, inlaid confections.  Genoa has over 100 palaces lining the streets – these 42 are the elite that were deemed fit for royalty and the Pope should they drop into the city and need housing that fit their station. 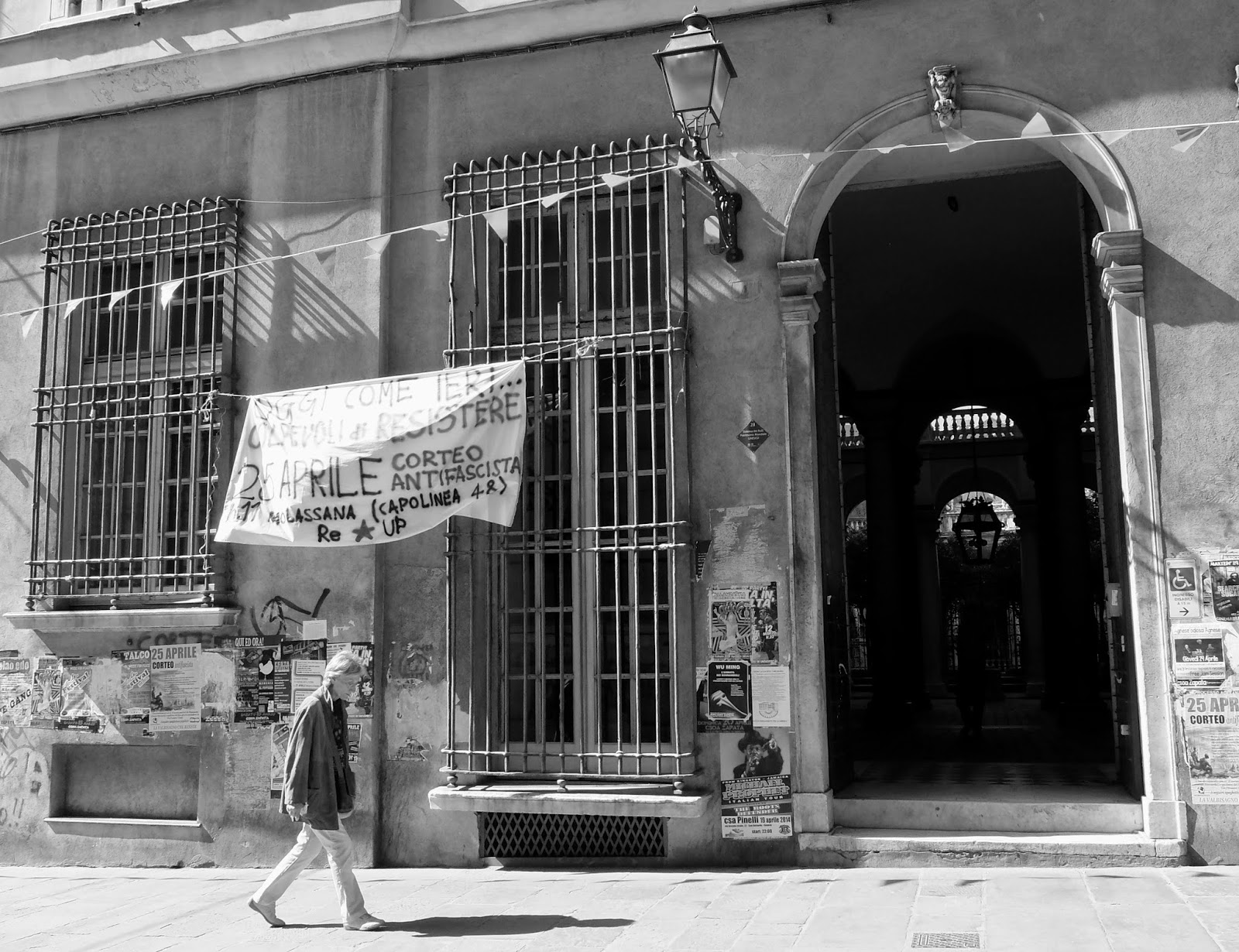 Today many of the palaces are restored.  Some are public buildings and museums.  Others are privately owned by companies or individuals.  Some are run down and even for sale (if you are in the market).

This  palace  is covered in graffiti and fliers and is the base for protest and discontent.  It is across the street from the University (also housed in a palace).

The Old city of Genoa is directly behind the port.  Goods came into the port and into the city that hid behind  fortified walls and elaborate portals.  The Old city is famous for its tiny twisted lanes that wind through and climb and tunnel.  These streets have shops and businesses, but mostly they are filled with residents who live in the homes that line the alleys and rise so high they seem to cut off the light above.  Women navigate home with shopping bags through the turns and tunnels.  Laundry hangs along the outside of the buildings. Men gather  in the piazzas outside and smoke and talk … probably just like they did centuries ago.

One thought on “Exploring Genoa”