You are here
Home > Bike Travel - India Travel Writing and Photos > Godhra to Jambughoda – 75 k
We’ve entered the Indian state of Gujarat, which has a large population of Jains and where alcohol is prohibited (to the distress of many who are anxious for their post-ride Kingfisher)
A man who lives in Ghodra heard about us last night when we rode into town.  He was a cyclist who in his youth biked to Kanyakumari – same as us.  So he packed up his family, they cooked a wonderful meal and dessert and chai, and they drove down to meet us this afternoon to share and visit.  It was delicious, and such a wonderful surprise.
I just have been continually amazed at the welcome warmth we receive here.  Granted there have been some more difficult encounters early on which seem to have lessened as I’ve gotten more comfortable being here and perhaps as we’ve headed south away from the touristy areas.  But people’s generosity is remarkable, and I can only hope that we would show the same level of openness to visitors back in the states. Sadly, I doubt it.
Within our group we are very divergent crowd when it comes to food.  Like college students love to spend hours complaining about the cafeteria food morning to night, our food seems to have become a focal point of debate.  Basically there is a contingent of folks who can’t tolerate spicy food and/or don’t really like Indian food. Or who have contracted a version of Dehli belly and understandably can’t manage it spice. And a contingent of folks like me who love it or want to keep trying the spicy local fare.  When we stay at some of these  hotels there isn’t any other food around so we have to eat at a buffet they set up.  The “too spicy” contingent has been working diligently to get all the food toned down (aka ruined in my opinion, though I’m OK accomodating a bit if everybody eats).  We tipped a critical balance yesterday when the food came out so dreary and bland it wasn’t edible.

So as many of you know that I take my food very seriously. I love the idea of eating fresh ingredients, locally prepared specialities, just like the real Indians eat it all the way to the south.  I want to taste all the regional differences because to me culture is reflected in food, and you can learn and experiences as much through your mouth as through your eyes.   So I proposed a compromise to our tour director last night: rather than blanding out all the food and continuing down that horrible path, why not just have a  “bland dish” or even a Western dish edible by people who don’t like spicy / Indian food and let the chefs work their magic and make the rest of us the food that is among the best in the world … for the silent  majority rest of us who are happy when our nose runs and scalp sweats from yummy spices. We’ll see what happens.

An easy ride today didn’t stop me from having a 3 hour power nap when we got in to Jambughoda for a rest day tomorrow.
We take a rest day after every 3 to 4 ride days and they are usually a mix of chores and sightseeing that goes something like this: 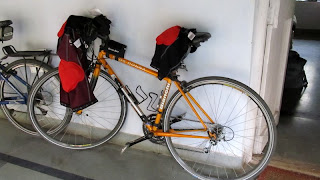 ·         Do laundry in the bucket in the bathroom and get that hung out wherever to dry.  Trusty is called to service this time, and the bushes outside the hotel courtyard are strung with people’s drying jerseys and clothes.  Today some of my cotton clothes were beyond the bucket. The hotel manager- a crotchety old guy – says they don’t do laundry. But his much smarter deputy guy has been taking it and I understand his wife is down the road beating it on rocks. All for supporting local entrepreneurs – and my clothes need a severe rock beating at this point.
*Service the bike: tighten bolts, check tires, clean and oil the chain, wash off the grime.  This is a good time to check for cracks or broken parts …
* Run any errands: drugs, cookies, water, chocolate – whatever. Head to town to the local kiosk to pay a fraction of what supplies would cost at the hotel.
* Some sort of sightseeing or exploring. There is a world heritage site- Champaner – 25k away and they’ve arranged a tour.  The tour was a bit hard to follow – a large group with a short attention span and a guide very interested in explaining every nuance of archetecture in a mosque with Hindu influences. But we eventually subdivided and conquored and I went off to explore the old city of both an early Hindu fortification complete with catipults and the later Muslim city. Not sure Champaner merits World Heritage site though the mosque and how it it incorporated Hindu elements was interesting.
*Actually rest. I’ve learned that actually resting on a rest day is pretty necessary – am I getting old?