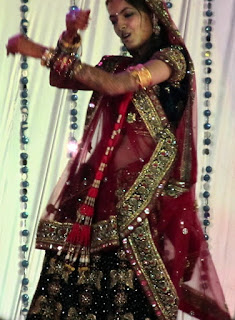 Tonight I was invited by the father of the bride to his daughter’s wedding reception.
Our hotel in Udaipur was the site of a wedding reception.  Apparently Udaipur a popular city for weddings.
There was wedding activity at the hotel all afternoon – and by the evening a baseball sized field was completely decked out with a stage, an elaborate tent of red drapey silk, lights were strung from every tree and hung all around field, a fountain was brought in and lighted and a formidable sound system had been set up and thoroughly tested.
When the dance performances started, Clive and I couldn’t resist any longer and we wandered over for what we hoped would be a discreet look from the sidelines.
But of course we stuck out like a sore thumb among the guests.  The women were draped in silk saris with lots of glitter and sequins and bangles. Some of men were dressed traditionally, but most were in very modern western clothes ranging from a suit to Euro fashion.  We were dressed like schlumpy tourists in T-shirts and capris and a fleece.
An enormous light-lined corridor complete with a red carpet led guests from the parking lot to the party.  There were TV cameras on big booms and large screens set up around the field. Big candelabra fireworks went off every half hour or so.  There were white-shirted wait staff running everywhere with food and drink. And two sides of the field were set up with various food stations serving curries, pizzas, breads and desserts.
This wedding was bigger than any I’ve ever been to back home.  And this was just day 1. Tomorrow they are having 2000 guests come in for the ceremony and a big dance party tomorrow night.
So we were lurking around the edges trying to get a glimpse of the dancing when a man came over, took both my hands and said “Please, I am the father of the bride and please be our guests. Come and eat and sit …”  I was just a little mortified – what a generous offer but did I mention I looked schlumpy and awful and he didn’t know us?  We were the definition of wedding crashers, but then he was so generous to extend a genuine invitation to share the celebration.  Then the mother of the bride came and joined. So we headed in and headed towards the back of the field.
By this point a few other cyclists had wandered in and joined. We watched the dancing and then people started putting bowls of food in my hands.  Oh yummy happiness. It was so delicious. All nice and spicy, most cooked over wood burning ovens on site. By this point we were less shy and self-conscious and one waiter kept bringing me food so I kept happily sampling. 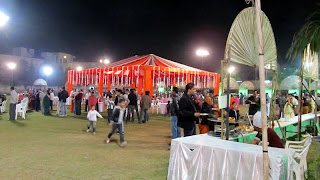 The music and dance kept coming for over three hours: children doing dances that looked like the little girl had practiced for hours and the boy had practiced in front of MTV.  Women were mostly doing traditional dance, younger people were going Bollywood.  Two MCs. The happy couple was introduced and – I’m guessing- asked embarrassing questions judging from the groom’s response at one point “Secret”.
Pretty soon I’m bellying up to the buffet to sample and people are showing me how to eat it – this bread first then this sauce on top.  A man stopped me and we chatted and he explained he was Jain and the family caste was Jain and they believe in not hurting a living thing.  He was part of the extended family and talked about how everyone wanted to attend weddings. He asked about the bike trip- and appropriately thought it was a crazy idea.  “That must be very tiring”.

I feel so lucky to been there.

One thought on “Wedding Crasher”