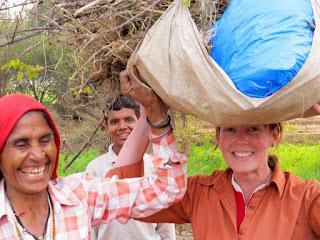 Today’s ride was 150k – 90 miles from Bharatpur to Sariska Tiger Reserve.
A long day. I have been sick with a cold and decided to just do the first 60k – I was concerned about burning so much extra energy and getting sicker or slowing recovery too much. (That is uncustomarily reasonable of me, btw. My normal first approach is to ignore it and hope it goes away. But why risk a 2 month trip for half a day of riding and I’ve been told my voice is sounding like Greta Garbo.)
I was glad I got in the van because of two reasons: the roads and riding that day would have done me in for sure and I had an amazing experiences that I might have missed otherwise.
We left Bharatpur- a small town that is known for its bird sanctuary and is a magnet for birders west of Agra.  Our destination was Sariska Tiger Reserve, and the route led through 150k of rural India. 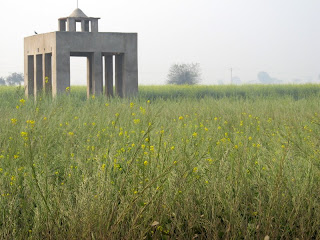 The countryside was beautiful – open spaces planted with mustard seed in full bloom with fields yellow mixed green.  Along the roads houses are made of brick or mud. Livestock mill about, and many houses had a bed in front with webbing for a mattress and one or more members of the family having a break. We would see women working in the fields or carrying loads on their heads as they walked down road, usually with faces fully covered.  And they looked beautiful in their jewel colored saris even as they did backbreaking work. Children saw us coming and sung out hello, Tata, or good morning!  Men would stare curiously, say hello and wave. The further we progressed, the more rural it got.
When I was told the roads could be bad, I really had no idea what they meant. Now I do. We saw everything from beautiful 4 lane divided highway with a good shoulder the first 25k that deteriorated first to asphalt with bike eating craters to dodge to a crumbled asphalt path less than a car width with rocks and dirt and sand on either side. All vehicles shared the asphalt, and we were regularly forced to side by whatever was bigger than us.  It was dodge and weave around holes, rocks and broken pavement.  Often the dirt shoulder was a better option even with the sand. Slow going – especially on my road bike – requiring full concentration to stay upright and protect the bike from damage. 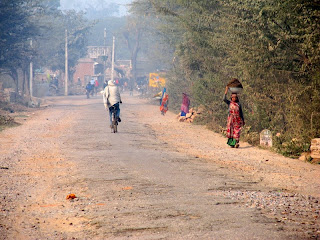 When we would reach villages, the roads would disappear altogether into dirt, rocks and mud. We speculate that it’s the district that pays for the roads, but the village pays for the road in the village. And they don’t have money for roads.  Villages varied. Some were neat and tidy. You could tell a prosperous area because it would have a Honda motorcycle dealership and other stores that indicated more than subsistence living. Others were clearly struggling. Narrow decrepit streets and buildings that looked more like wood shacks. Teeming with people, dogs, pigs and dirty.
All that in the first 60k before I got off and went in the vehicle.  After I got off the bike, the other riders kept going through it for the full 150k, and the roads and conditions only got more difficult the rest of the way. I gained respect for them – that was tough going.
But thanks to getting off the bike I had an experience that I won’t forget soon.  Wherever we stop we draw a crowd, literally. If stop to do anything like take off a jacket or a small bike repair I can quickly have 20 people around watching every move carefully.  A little unnerving till you realize they are just curious.
We were waiting for cyclists at the 110k mark to check on them and give them water or food.  We had a nice crowd looking on.  We were changing a flat tire and making way too complicated a production out of it.  An older woman came up and a bit of conversation happened and folks in the audience (I assume) brought her up to speed on what we’d been doing.
I generally try to smile and nod and say Namaste (Hello) to folks and am courteous.  She eyed me funny, but after her briefing seemed to think I might be OK.  She had been carrying a huge bundle of sticks and grass on her head – probably 3 feet in diameter at least.  I did something that basically indicated that thing must be heavy.  She asked if I’d like to try it out.  Crowd is getting excited at this point. I say sure why not.  And so both of us lift this bundle of sticks and greenery (cow food I was told) on my head. That sucker was heavy. My head hurt just holding it. She probably did this several times a day and walked many kilometers. Incredible. I wouldn’t make it 20 feet.
It’s those kinds of experiences that make traveling worthwhile.